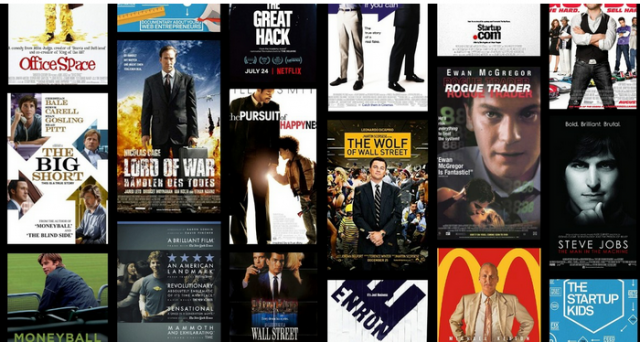 Movies Every Startup Founder Should Watch

Running a startup is not easy. You have a ton of responsibilities each of which you must do well. And while this may be a lot of work in itself, the true challenge for anyone taking this path is keeping themselves motivated on the bad days. Mind you, there will be quite a few of those. So, what can you do?

A great way to de-stress and keep yourself pumped up is watching movies with stories similar to yours. As you watch the characters struggle like you and despite it all make it big, it’ll give you the hope you desperately need and it will push you to keep going. Here is a list of great hits to get you started. If you have the Spectrum Select TV plan, you’ll easily find them on their on demand library to binge.

Table of Contents hide
The Startup Kids
The Social Network
The Triumph of the Nerds: The Rise of Accidental Empires
Who Killed the Electric Car?
Startup dot com
Pirates of Silicon Valley
E-Dreams

You may know all the big names in the industry and what they’re doing today, but if you aspire to get where they are you’re sure to be interested in knowing how they achieved what they did. If you are, then this is the perfect documentary for you.

This movie weaves a captivating tale using interviews of how young Dropbox, xsmoke, Vimeo, Soundcloud and Debita founders began their startups. You learn what it was that inspired them and drove them to build the impactful businesses that they did. You’ll learn about their struggles and whenever you’re feeling down we’re, these stories will bring you comfort.

With all the buzz surrounding this movies, it’s hard to have missed it. But, for those who haven’t had the time to watch it before, well, you might want to get your popcorn ready for this hit.

The Social Network focuses on the founding of a platform that changed the social media scene: Facebook. You are taken to the dormitories of Harvard where the idea is first conceived. Mark Zuckerberg and his friend begin this venture seeking to create something interesting. Soon enough though, it blows up with all the university students across the globe wanting an invite to this platform. As great as that sounds, there are friendships that break and lawsuits to be addressed in the aftermath of it all.

The Triumph of the Nerds: The Rise of Accidental Empires

Technology has fast changed the world. You might remember the floppy disc or you might not. However, if you want to get to the origins of it all, this engaging film is a must. It gives you an insightful look into the history of computers, from their rise in the 1970s until 20 years later when the Dot-com boom occurred.

Who Killed the Electric Car?

In 1996 when General Motors released its EV1 to select customers in the state of California, it seemed that a new era was about to begin. Electric cars were the future and one would expect a complete transition to this side however, that never came to pass. Sure, other automakers tried to follow GM but despite the initial interest, the idea tanked and electric cars never made it to wide distribution. So, how did it all go wrong? Well this documentary explores the answer to this mystery.

It examines various aspects from consumer demand to technological limitations trying to figure out this innovative technology never took root and why the industry failed to disrupt from within? Was it the oil mafia or the Bush administration that led to its demise? Watch and you’ll know.

The startup govWorks.com was making waves, however that was short-lived. If you’re wondering what happened to this emerging firm then watching this documentary Movies is a must. Delving into details with the company’s founders, Kaleil and Tom, this movie examines the challenges and the pitfalls they faced. A cautionary tales that you’re sure to find relatable, this is one you simply can’t ignore.

The rivalry between Steve Jobs and Bill Gates is legendary and this movie takes you through it all. Sure it’s missing on the introduction of iPhone that changed the tech world forever, but there is still much fun to be had with this watch. In the first part of the movie, you get a close view of Gates’ and Ballmer’s time at Harvard and Jobs’ and Wozniak’s early years at UC Berkeley. The second part focuses on the development of personal computer and Jobs’ fall from Apple. The third part gets into the new alliance Gates and Jobs build that paves the way for the technology we can’t live without today.

Things seldom work out as planned. One second you have it all and just the next second you might lose it. Such is the turbulent story of Kozmo.com. E-Dreams gives you an in-depth view of the company’s high and lows and take you through the founders time raising money to file for IPO. However, when the market crashes in April 2000, all the hard work goes down the drain. An interesting watch Movies for sure.

There that’s it, these ought to get you through the month at least.