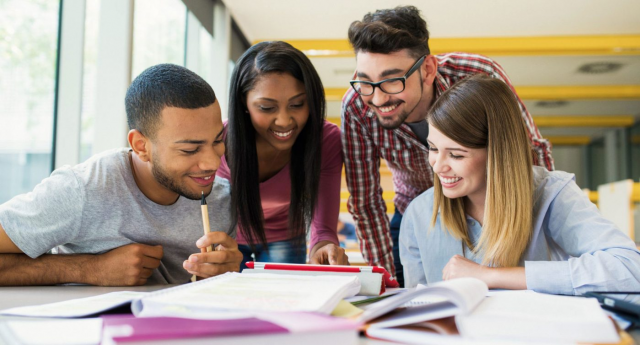 Table of Contents hide
What is a Trade School?
#1: It Doesn’t Take as Long to Finish
#2: It’s Not as Expensive as College
#3: You Can Still Get a High-Paying Job
#4: You’ll Still be Able to Continue Your Education

What is a Trade School?

Attending a four-year college or university is not always an option for many people once they’ve graduated high school, for a variety of reasons. Because of this, they believe that they can’t further their education at all, or earn some type of degree at all. However, many people are overlooking the option of attending a vocational school, or trade school. A trade school is an educational institution that specifically prepares students to work in their chosen field, usually work that is very hands-on.

Completing a program at a trade school will leave you with a certificate or Associate degree, which will still get you more job opportunities (and pay) than just a high school diploma. However, there are more beneficial reasons to consider attending  trade school over a college or university.

#1: It Doesn’t Take as Long to Finish

Most trade schools only take about two years to finish, and sometimes apprenticeships are included in those two years. There are some programs that are three years long, plus an additional apprenticeship, but they’re still shorter than most university programs. You also don’t have to spend time taking basic curriculum courses, such as math and English— you go straight into courses that relate to your chosen field.

Classes at a trade school are also much smaller than university classes. Also, the people in your classes are people you’re going to get to know really well and network with. It’s not like the huge university classes where the majority of students won’t interact with each other again once the course is over.

#2: It’s Not as Expensive as College

Because trade school programs are typically shorter than university programs, they’re also much less expensive than university programs. Unfortunately, college students go into thousands of dollars of debt when attending a university, and even more at a private college. Trade school programs don’t cost nearly as much because of the smaller class sizes, and lower number of classes to take.

You also have more flexibility in when you want to start your program, whereas most universities start their semesters in the fall and the spring. Some courses in certain trades may even be offered online or as hybrid (both online and in-person) courses, providing you with even more flexibility.

#3: You Can Still Get a High-Paying Job

Many people are under the impression that trade jobs don’t pay a lot of money. This couldn’t be further from the truth— depending on which trade you enter. It’s true that some trades pay minimum wage or just above minimum wage, but many others pay very well. For example, radiation therapists can make salaries comparable to physicians at $100,00 per year. Here are some more examples of some of the highest-paying trade jobs:

Keep in mind that these salaries are just averages, so where you work also determines your salary.

Trade schools also tend to have high job-placement rates because they prepare their students to receive a job. Also, trade jobs are in such high demand all over the country that it’s almost guaranteed that trade students will have a job once they’ve completed their program.

#4: You’ll Still be Able to Continue Your Education

When a student graduates from college with a Bachelor’s degree, the next step is to attend graduate school for a Master’s degree. You may think that once you complete trade school that you can’t advance beyond that, but there’s still room to grow and learn in your trade. Most trade jobs require workers to renew their licenses by taking additional courses.

While the courses are designed to refresh your knowledge and skills, they may also contain updated information. Trade schools are very good at keeping their students and graduates up-to-date with the latest trends and newest developments in technology.

Unfortunately, trade schools and trade jobs are looked down upon because the graduates don’t earn Bachelor’s degrees or end up working in corporate jobs. Still, those who work in the skilled trades are just as intelligent and hard-working, if not more. The money that they put into their education also goes directly to the skills that they learn, rather than to this and additional fees.

If it’s your dream to pursue a career that’s not in the skilled trades, you should still pursue it. However, if you’re undecided or if you’re curious about a career in the trades, it’s definitely something worth looking into. It won’t take as long as a university, it will cost you less, and it will prepare you for an industry that has an abundance of jobs and very good pay.

9 Tips for Mastering Your Next Assignment

Look at the List of the Best BCom Colleges in Dehradun

How PMSSS is Changing Students’ Fates